Convenience stores and the hospitality industry have long grappled with the intricacies of state and municipal labor laws. Of late, these labor laws have gotten more complicated as cities and states across the country implement “fair workplace” or “predictive scheduling” ordinances.

Designed to improve the work/life quality for restaurant workers, predictive scheduling laws require employers to set their employees’ schedules (a certain amount of time, depending on the jurisdiction) two weeks in advance and subsequently penalize employers (to the paid benefit of the employees) who change those schedules without sufficient notice.

According to current National Restaurant Association statistics, there are 15.1 million restaurant industry employees in the United States.  Meanwhile, according to the National Association of Convenience Stores, the quickly growing c-store space supports over 214,000 employees.  Regardless of industry, most of these workers do not have health insurance and work for minimum wage. These new predictive scheduling laws are helping to keep them happy by trying to provide them a work-life balance that’s sustainable over time. For restaurants and convenience stores, the laws could help drive down the huge turnover experienced due to long hours and unpredictable shift schedules. 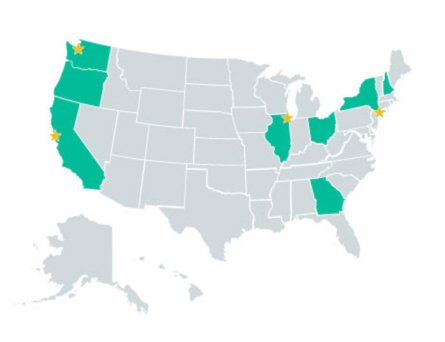 As might be expected, these laws are taking root in America’s biggest cities first. Philadelphia’s “Fair Workweek” law goes into effect on April 1, and Chicago’s Fair Workweek Ordinance on July 1.  They join three other municipalities -- including New York City, San Francisco and Seattle -- that have already implemented predictive scheduling laws. The state of Oregon was the first to pass a fair workweek law in 2018, and New Jersey may become the second state if a law proposed in January is passed.

The New York City 2017 Fair Workweek law includes a “clopening” restriction, which requires that employees must have at least 11 hours between shifts on two calendar days. If not, the employer must pay them a $100 premium to work the shift.  This is in addition to the New York State “Spread of Hours” statute that requires an employee whose workday begins and ends more than 10 hours apart are owed an extra hour of pay.

In most jurisdictions, the premium due to the employee is a flat fee, based on whether the employee’s shift is reduced or changed and the amount of time between the change and the start of the shift. In New York City for example, the premium amount changes significantly depending on if the shift is changed with less than 14 days’ notice, 7 days’ notice, or less than a day.

Predictive scheduling laws are gaining traction on a national level, too.  In fact, the fair work week was a part of ex-presidential candidate Elizabeth Warren’s platform. Restaurants and c-stores would be wise to give these new laws the same consideration that they’ve long given to federal and state child labor laws.

After all, the consequences for violating them can be dire. For example, in September, New York City sued one restaurant company for more than $1 million alleging that the brand had violated "nearly every aspect" of the city’s “Fair Workweek” law.

For restaurant and c-store managers who are already struggling with staffing issues, the new predictive schedule laws add another layer of complexity to the already challenging scheduling process. Restaurant managers who fall afoul of the new laws will be hit with premiums or fines that could cut into their overall profits.  Brands that operate restaurants in multiple jurisdictions need to comply with the nuances and idiosyncrasies of each municipal law.

How can restaurant brands streamline the scheduling process to take into account these new predictive scheduling laws? After all, it’s in their best interest to avoid fines and to improve the welfare of their employees.

Here’s six things that brands need to look for in a labor operations management solution that will keep them compliant with increasingly complex labor laws:

With full visibility into the scheduling process on both a store and corporate level, leadership can see who is doing well with labor law compliance. They can see which managers are racking up premiums, and then hold them accountable.  They also may decide that it is financial worthwhile to pay premiums if and when a staffing decision could generate a negative guest experience.

The fair workweek laws can be difficult to manage. The laws are new and have so many nuances. Restaurants and c-stores should be working to make schedule optimization easier for everyone. A good labor operations solution will help them stay in compliance, avoid fines, and keep team members happy.

Garrett Tietjen is CrunchTime's Project Manager for Labor and Workforce products and services. With a background in hotel food and beverage management, including restaurants and banquets, Garrett has experienced the tough obstacles and rich rewards that comes with managing a hospitality staff.

How eLearning Will Help Restaurants Ramp-up Training After the Pandemic